Rendering your application on both the client and the server enhances the user experience greatly. The scaffold is using AirBnB's hypernova microservice as the basis to implement this. Hypernova handles a lot of repititive logic like managing a rendering-cluster as well as avoiding memory leaks by using JavaScript VMs for each request. This way you are safe from weird side-effects, another cool feature of it is that it's framework agnostic. :tada: 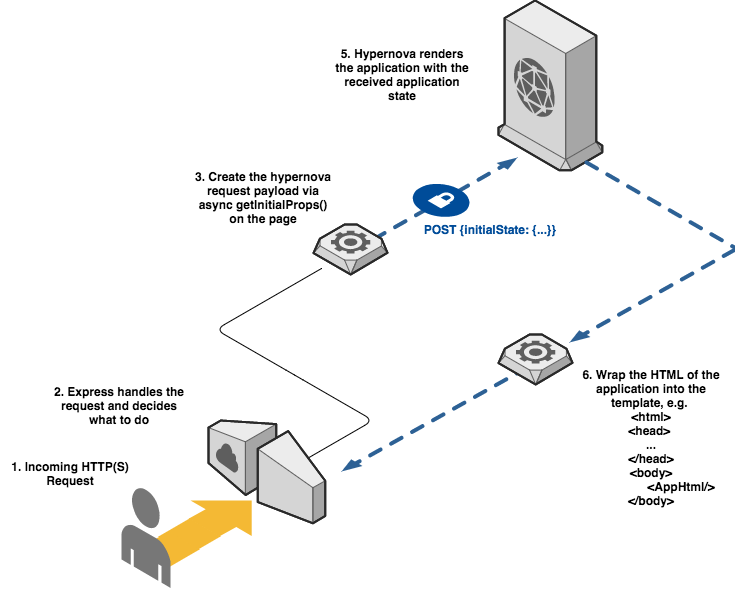 How does server side rendering work in this scaffold?

Before we jump into the flow of rendering the app on the server, lets take a look what the scaffold executes upon start and generates while building the application.

The web server is is a simple HTTP server which uses the express framework, it will serve the whole app and it's assets to the user. By default it's configured to catch all GET requests to /, once a get request hits this route it will executes the pages getInitialProps() function to generate the request payload to pre-render the app on the server.

The request payload to hypernova contains the appId to be rendered as well as the initialState which we generated in the previous step and will be sent to the hypernova server instance via an HTTP POST.

Once hypernova receives the render request, it will decide on which worker instance (CPU core) the task needs to be rendered on. The chosen worker will pre-render the application in a VM with the initialState provided in our request body and as soon as React rendered the application it will return the HTML to the web server instance via the response body. It's now up to the web server again to wrap the received HTML of hypernova into the index.html template that webpack provided us and of course send the result to the user.

Rendering your application on the server can be slow, especially if you need to fetch a lot of data (or your APIs aren't that fast in responding with data). In general Google and few other big players currently recommend to only pre-render the so called "application shell" so it might be worth to evaluate if this concept is a good option for your application and company.

In case this is not an option for you, we recommend you to read the following articles: